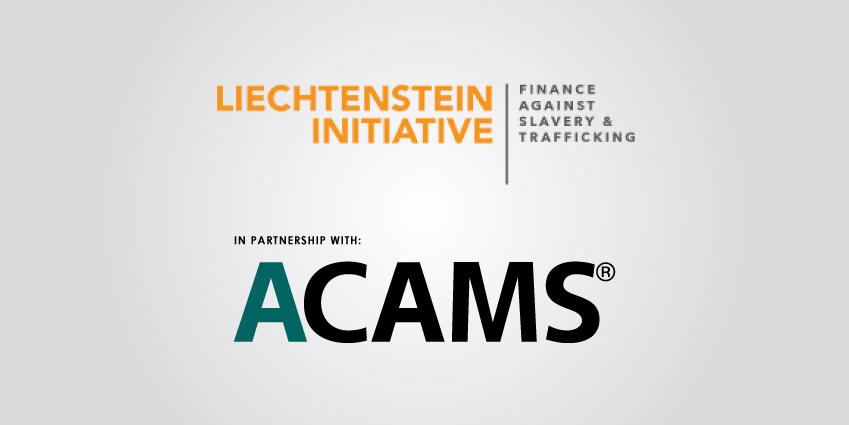 6 FEBRUARY 2020 – WASHINGTON, D.C. – The Liechtenstein Initiative for Finance Against Slavery and Trafficking (FAST), a project based at the United Nations University Centre for Policy Research, and the Association of Certified Anti-Money Laundering Specialists (ACAMS), the largest international membership organization of financial crime prevention professionals, have today announced a strategic partnership to further mobilize financial sector stakeholders against modern slavery and human trafficking. The partnership was signed ahead of the ACAMS Anti-Financial Crime and Public Policy Conference taking place in Washington, D.C.

Following the release of Unlocking Potential: A Blueprint for Mobilizing Finance Against Slavery and Trafficking during the United Nations General Assembly in New York in September 2019, FAST has collaborated with key partners to support dissemination and implementation of the FAST Blueprint (“Blueprint”) worldwide. Strengthening compliance with anti-money laundering and counter-terrorist financing regimes is outlined as a key action in the Blueprint and mirrors the overarching goal of ACAMS to end financial crime. This strategic partnership will take this forward and promote awareness and implementation of the Blueprint amongst the global anti­money laundering community.

ACAMS will launch an Official Pledge in support of the FAST Initiative, encouraging its 77,000 strong membership community in 175 countries and 70 chapters worldwide to commit to taking action in line with the Blueprint. ACAMS has committed to develop a bespoke human trafficking awareness certificate with input from FAST, create a series of digital tools to educate ACAMS members and participants about modern slavery and human trafficking at its global conferences, and support local ACAMS Chapters around the world to incorporate the FAST Blueprint.

Rohit Sharma, CAMS, president & managing director of ACAMS, said: “ACAMS is dedicated to advancing the professional knowledge, skills and expertise of our members, and so we are looking forward to this important and strategic partnership with Finance Against Slavery & Trafficking. Our Official Pledge will galvanize our 77,000-person strong community to take action and our new certificate will be an important training tool. With an estimated 40 million people in modern slavery, there has never been a more important time for financial crime prevention professionals to be actively involved in this effort.”

The Head of the FAST Secretariat, Dr James Cockayne, added: “Since its launch, Finance Against Slavery & Trafficking has seen an upswell of support from the financial sector and other stakeholders. As we continue to strengthen financial sector understanding of modern slavery and human trafficking risks, greater awareness among anti-money laundering specialists of the indicators of these crimes will be essential. With an extensive international network of financial crime prevention professionals, we are delighted to be partnering with ACAMS to take this work forward.”

In response to the rapidly growing nexus between financial technology and the anti-money laundering (AML) sector, ACAMS has launched a new certification program for FinTech companies seeking to meet regulatory standards in an evolving market environment.