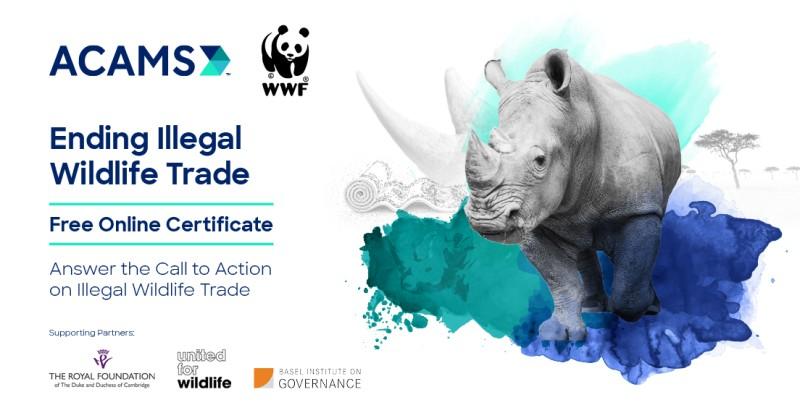 CHICAGO--(BUSINESS WIRE)--The World Wide Fund for Nature (WWF), a leading international conservation organization, and ACAMS, a global membership organization association of financial crime prevention professionals, have launched a free training certificate for compliance professionals and others seeking to protect their organizations from the threats of illicit finance linked to Illegal Wildlife Trade (IWT). The certificate, which is available on the ACAMS Learning Management System from today, is the result of a recent global partnership between WWF and ACAMS to drive collaboration in the fight against what the Financial Action Task Force (FATF) has called a “major transnational organized crime.” United for Wildlife, The Royal Foundation and The Basel Institute on Governance are supporting partners on this global effort to bolster awareness of IWT risks among the compliance community.

Learners of the certificate will acquire knowledge on the steps that the financial sector should take to identify, report, mitigate and remedy the risks associated with each stage of the illegal wildlife supply chain, including guidance on how to uncover shell companies and import-export schemes associated with IWT. Applicants will undergo two-hours of self-paced training on content developed by a global team of IWT specialists and other subject-matter experts.

Commenting on the launch of the global training certificate, Margaret Kinnaird, wildlife practice leader, WWF, said, “This training course offers a formidable tool in global efforts to curb illegal wildlife trade. It fills in the existing knowledge gaps to help compliance professionals better track and trace financial flows and eliminate systemic corruption that threatens our planet’s biodiversity and all of us who depend on it.”

This was echoed by Angela Salter, interim president of ACAMS, who said, “ACAMS recognizes that AML practitioners are in the unique position to protect not only the integrity of our financial system but also the global ecosystem, as they investigate the transactional and trade networks used by IWT syndicates to generate billions of dollars in illicit proceeds every year. That’s why we’re proud to drive an initiative that offers compliance professionals a world-class training tool that can help them apply their expertise toward dismantling the money-laundering schemes that allow wildlife crimes to flourish. As FATF made clear earlier this year, fighting the illicit finance associated with IWT is a matter of global urgency.”

“United for Wildlife is pleased to support ACAMS, the largest international membership organization dedicated to fighting financial crime, as it empowers its members to face the challenge of the growing threat of illegal wildlife trafficking,” said David Fein, chair of the United for Wildlife Financial Taskforce.

“Since we formed the United for Wildlife Financial Taskforce in October 2018, we have sought to support the public, private and not-for-profit sectors in recognizing the significant but for-too-long ignored financial crime,” he said. “We are delighted to welcome ACAMS as a United for Wildlife partner, and we look forward to supporting their efforts to raise awareness, develop training modules and create compliance toolkits so that the finance sector can better identify, report and prevent the illegal wildlife trade.”

Gretta Fenner, managing director, Basel Institute on Governance said, “Financial crime is what makes illegal wildlife trade both possible and attractive. Curbing financial crime in the context of IWT and many other forms of environmental crime - through prevention and enforcement - is at the heart of the Basel Institute’s Green Corruption program. We are therefore delighted to support ACAMS and WWF together with United for Wildlife in the development of the Ending Illegal Wildlife Trade certificate. It is a vital step in helping the global compliance community, including ACAMS' members globally, get ahead of the curve in efforts to prevent, detect and respond to financial crimes that fuel IWT. The challenge is huge - it’s with multi-stakeholder partnerships like this, which span across many communities and bring together experts from a wide range of professions, that we stand a chance to succeed.”

The launch of the Ending Illegal Wildlife Trade certificate marks the second free-of-charge impact certificate to be introduced by ACAMS for its global community this year. In June, the association launched The Fighting Modern Slavery and Human Trafficking certificate in collaboration with the Liechtenstein Initiative for Finance Against Slavery and Trafficking, a project based at the United Nations University Centre for Policy Research. The IWT certificate can be accessed here : https://www.acams.org/en/training/certificates/ending-illegal-wildlife-trade.

WWF is an independent conservation organization, with over 30 million followers and a global network active in nearly 100 countries. Our mission is to stop the degradation of the planet's natural environment and to build a future in which people live in harmony with nature, by conserving the world's biological diversity, ensuring that the use of renewable natural resources is sustainable, and promoting the reduction of pollution and wasteful consumption. Visit panda.org/news for the latest news and media resources; follow us on Twitter @WWF_media

ACAMS is a member of Adtalem Global Education (NYSE: ATGE), a leading workforce solutions provider headquartered in the United States. ACAMS is the largest international membership organization dedicated to enhancing the knowledge and skills of anti-money laundering (AML) and financial crime prevention professionals from a wide range of industries. Its CAMS certification is the most widely recognized AML certification among compliance professionals worldwide. Its new Certified Global Sanctions Specialist (CGSS) certification commenced in January 2020. Visit acams.org for more information.